I bought a new Kindle Voyage recently. It's a great new device with an amazing screen resolution and one killer feature that defeats my old Kindle Touch - it's got an automatically adjustable screen light. I've been meaning to update my old device for a while now since I usually read in bed at night before heading to sleep. In my current set up my night stand lamp is pretty bright and I found that it might disturb the person trying to sleep next to me. There's where the light comes in handy. It adjusts accordingly to the brightness of the room and sometimes turns on even during the day, which makes the screen very enjoyable and crisp to read, just like a regular book.

I wouldn't say that eReaders are the only way to read books these days but they do have a few advantages over "analogue books".

The second killer feature that makes the Kindle a really interesting device is the Dictionary which let's you know what a word means. I found it especially rewarding in my adventure with books in English.
I would love it if Amazon finally realised that there are more avid readers in other languages too. I find that reading books written in the past, ones from before the XXI / XX century or some books I was told to read in school written in a difficult language, would be a lot more understandable if I could get my hands on a Kindle dictionary in my native Polish. Languages change, some faster than others but they all get added with a few new words that become normal for people that use it every day. For me as an expat living away I try to keep up but sometimes it would be great if I could just get to tap on a word and get it's meaning directly. I find myself often stopping to read a book and going straight to a Polish online dictionary or Wikipedia and losing track of the book by going from article to article and diving deeper into understanding what is it that I'm actually reading about.
Don't get me wrong, diving into Wikipedia is great. And usually it's very rewarding to learn about a new concept that is related to the topic you're reading. Books about Pan Samochodzik and his adventures with all sorts of historical artefacts are one of those where you read about a Grand Master of the Knights Templar or the Teutonic Knights where I learned that these historical figures that where the archenemy of the Polish state in the 1400s are still very much a thing. They don't fight pagans with swords any more, but they're still going since 1190.

So where do I get ebooks?

I went on a bit of a tangent there. So let's leave the Teutonic Order behind and ask a question. Where do I get ebooks in Polish? There are is a vast number of ebook stores that sell a variety of ebooks around the in the World-Wide-Web. Some are more expensive than others, but they all have this one big flaw - They are not the Kindle Store.

Convenience is a big deal and it the reason why I'd usually get a book directly from the Amazon Kindle Store instead of going to one of the cheaper options. It ties in nicely with my Goodreads account and it generally is just a few taps away.

The problem arises when I learn about his great new book on the radio or somewhere and really want to read it but it's not on the regular Kindle Store. Or if it is, it's only in English or any other of the usual language suspects like German, French or Spanish. An example of that are the Harry Potter books, where I enjoy the version translated into Polish instead of the original version. Maybe it's just me, but magic is something that should touch your heart and leave a mark on it. J.K Rowling did a great job in creating the world and telling the story, but for me the physical aspects of English as a language render the books as a bit cold.

Languages hold value in the culture they carry with them. If you master a language to the level where you are fluent you find yourself sort of being a different person and definitely talking about different things in different languages. It's just how they work and you can really have fun with that once you know a couple. For business I like to use English, it's direct, it's cold and calculated and it doesn't carry much emotion with it which is perfect if you need things done.
That being said, watching a football match where the commentator is speaking English just doesn't give me the same satisfaction as watching it in Polish. The power of emotion that a language carries is what makes the experience so good, and in fact changes the person using it. The best part about it is the more languages you know the more you're going to laugh, because there's always some normal word in one of them, that in other languages would make a heck of a joke in the current context.

So can I get a Polish Kindle Store?

As of today the short answer is: No. Long answer: Not yet, but wait 'til they finally open it up and then fill it up with books and then maybe you will be able to get something.

The more I wait the more I find it like it being a bit of a Game of Kindle Thrones where the store is coming, but we just don't know when.
As of today Amazon.de is offering it's services in Polish and there is quite a bit of content in there, but the problem still remains. It's not a fully fledged dedicated store.

What if I'm so modern that I don't have a laptop?

Often times I go to town with my Kindle or go on holidays and I don't want to bring along my laptop. Carrying a laptop, no matter how big light it is, is a burden. It is also one of these things that you will think about a lot if you decide to leave it behind or if travelling on a bus, it's just another thing that takes space in that small backpack.

Personal Ebook Library for the rescue!

So instead of me waiting forever for the Kindle Store and not being a fan of the whole plug your USB cable (where's my cable?) to a laptop (where's my laptop?!) and transfer the .mobi file (wait, what now?) I went along and made my own pseudo store.

My current library has an overwhelming amount of 43 books that I read, will read or am currently reading. It's not a massive bookcase, I admit, but it can be a bit much in terms of choosing the next one. I have ebooks from many places and sometimes I forget what they are or just want to know a bit more about them. That's where The Ebook Library comes to play.

For the nth time when I was unable to get my newly bought book onto my eReader due to lack of a laptop, or cable or the likes I decided I'll just upload the file to my FTP server and then use the experimental browser to browse to the link and download it directly. That was the origin my little side project.

After a while I found that a list of 40+ links to files and books I know nothing about is not very tickling my curiosity enough. Turns out the Google Ebooks service has a handy API that will provide you with book details if you search for it. Since books come with ISBN numbers when they are published this was a brilliant addition to my boring old list of .mobi files. 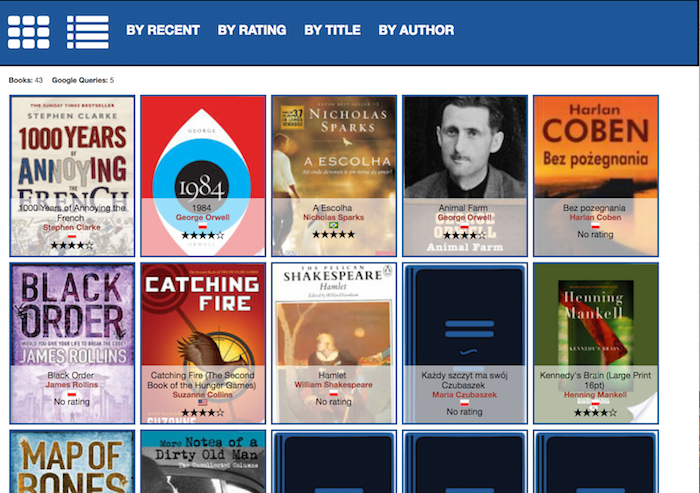 Now the library had a bit of a personality, I can see book covers, user rating and sort them by language, title, author or amount of pages.
All with the same list of boring ol' files with a quick addition - each file I add now is prefixed with it's language and ISBN number that can be found through Google Books. It looks something like this:

Goodreads also have a few handy APIs, one of them is the ability to add in review comments by users to the book also by ISBN. That gave the boring old list a lot of merit and something that will eventually become something a lot more than just a quick way to download files.

The source code for the quickly hacked version that I use today is available on Github at https://github.com/piotrekkmt/Ebook-Library, so have fun in setting your own library.

See how you can automate your life including building a Kindle store for yourself. 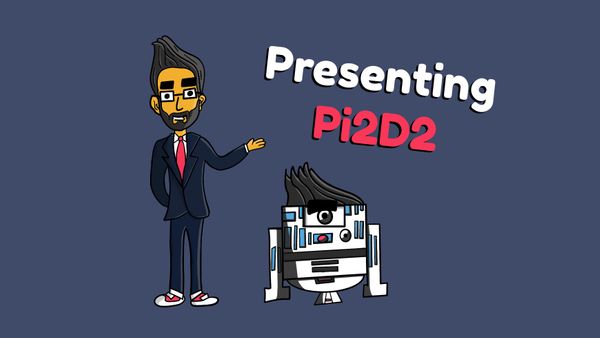 Pi2D2 is getting a bit more action with a Firebase connected Python script that can be controlled using a NodeJS app running on a laptop. This is a step towards 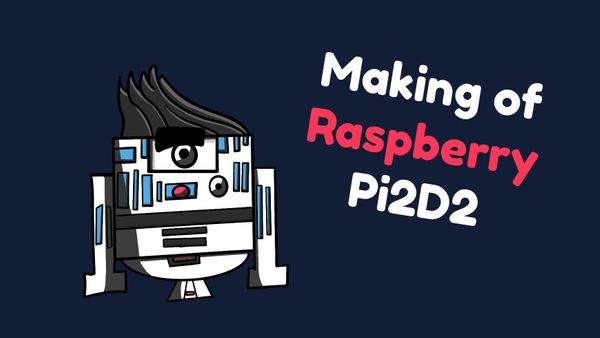 Make your own R2D2 robot and control it using Scratch over wifi. 1 - Body ~ Tear through a styrofoam TV box holder ~ Add in some details and connect the legs